I am running the latest beta of macOS Big Sur, and Open Site Shell is not opening at all. Is there a manual way to access the site shell from macOS?

Hey @aaronmclayton, Welcome to the Local Community Forums and thanks for taking the Beta for a spin!

It’s hard to know what might be failing. Can you please provide your Local Log? See this Community Forum post for instructions on how to do so:

In terms of accessing the shell without the UI – you might be able to. When you click the “Open site shell” button in Local, a shell script is created in:

If that script is created, you should be able to manually call that script from within a shell to get the necessary context set up.

The main problem I could see happening is that Local wasn’t able to create that script. Can you take a look a the Local log and let us know if there are any errors contained within there?

Unfortunately there are no logs created and no script either.

If you click on “Help > Reveal Local’s Log” it should take you to that location. Depending on the version of Local you are using, you might have different names for that log. Since you mention using the Beta version, you’ll want to look for the log named local-beta.log. Here’s an example of what my folder structure looks like on macOS:

Thanks for that extra info @dgwatkins!

So it sounds like the script was created, but Local didn’t automatically open a terminal for you, is that correct?

A couple of things I’m curious about and would love clarification on:

As a side note, when I google macos big sur terminal not opening there are some hits, but most of them talk about the window opening, but the shell not actually being initialized.

The thing is that I installed macos beta more or less at the same time that I updated Local to the latest version. So I am not sure which one of the 2 updates caused the issue.

I have the same issue!!

Any help would be greatly appreciated.

As of right now, this appears to be an incompatibility between Local and Big Sur, but I’d love for you to answer the same questions I asked above so that we get a better idea for the real-world settings that are in place:

I know Big Sur is still in beta, so I’ll keep poking around for a workaround. But I wanted to mention that I’m having the same problem, so +1 to this bug.

Thanks for all the feedback everyone – we have some work planned to take a closer look at these things, but I don’t have an ETA for when it will be worked on and fixed.

In the meantime, I hammered out this shell mess to hopefully allow you to work around this limitation. Basically it allows you to quickly find which shell script you need to run in order to get the environment scaffolded up:

It might make sense to save that to a file within your path so that you can access it from anywhere:

Thanks for that Ben.

It works much quicker than my current solution (open dev-tools, inspect elements to find the site-id)

One gotcha I didn’t mention – these site-shell scripts aren’t created when the site is created. You’ll still need to click the “Open Site Shell” so that it creates that script initially.

From there, the above shell command I posted should get you all of the shells for your sites.

Hey this topic was two months ago. IT seems the problem persists even past beta. I cant get the site shell to open and I just updated to Big Sur today. Using Version 5.9.2+5056 and MacOS 11.0.1

@ben.turner it seems that Local never cleans up deleted sites, consequently this script can become quite unwieldy with all the results. But thanks, as it works. <3

Oof. I can see how that gets ugly. I don’t have a fix, but doing a little CLI monkeying around with jq, I can see that at the very least on my machine, I don’t have any orphans – ie, shell scripts that don’t have a corresponding entry in the sites.json file: 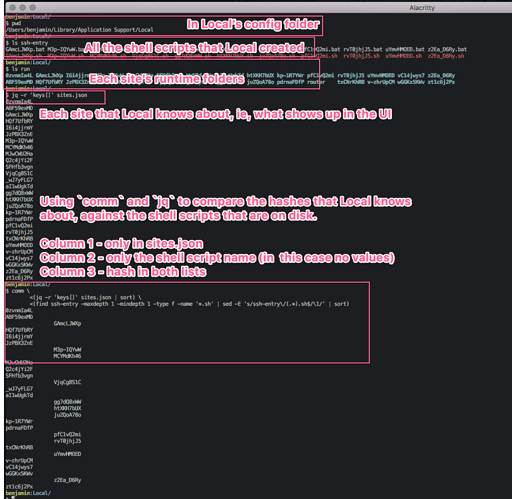 Maybe some of these commands can help others with cleanup?

But that cleanup definitely would get tedious, so it might be easier to nuke everything and start over – which is what I end up doing every month or so with the amount of QA I do related to odd, broken sites.

Note, that comm can be used to only show one of those “columns” so to only see entries that only exist in that second list (ie .sh files), you should be able to do something like this to “suppress the first and third columns”:

Again, none of this actually cleans anything up, it just is meant to help you zero in on what might not actually exist anymore.

For the feature request, removing the specific site shell scripts on a Delete of the site would be great.

Any ETA of ‘Open Site Shell’ fix for Big Sur?

Bumping this. Also wondering if this will be fixed soon.