Sorry you must provide a path in C:\Users

Is there a valid reason why this is a thing? (forcing user to only use C:\Users) 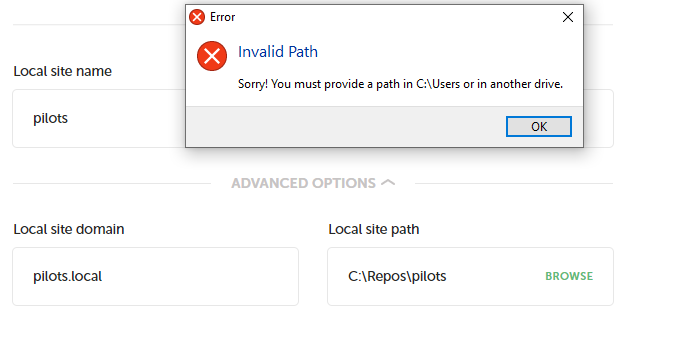 All of my repos are setup already in another subfolder on my C drive. Why does local force us into Users folder?
If this reason is still not valid, could the restriction be removed? thanks!

Hi! This seems like a bug with not allowing the user to choose where to store the site files. Is there some more information I could provide that would help with providing a fix for this?

I think that this would 100% be a bug if Local indicated that you could create a folder somewhere outside of C:\Users but then failed to do so.

My thinking of putting it in the Feature Request category was that Local is clearly telling you that you can’t have the files in a place outside the C:\Users folder or on another drive, so the app is working as intended. Changing this behavior isn’t really fixing a bug, it involves reworking how Local works in order to do something new.

I’m not 100% sure of the reason for that requirement, but if I were to guess, it’s likely a limitation of Windows permissions and the way that Electron (the framework that Local is built on) works. I’ve created a ticket for one of the Local engineers to take a closer look, but I don’t really have an ETA for when it will be worked on since there aren’t any votes on this and it doesn’t seem to be a high priority for the community.