As per discussion at Sequel Pro has been abandoned. New team has forked to Sequel Ace, support for Sequel Pro was recently removed under the somewhat false premise of Sequel Pro being an abandoned project.

However, on the referenced GitHub issue, the maintainer has clearly stated that the project is not dead: https://github.com/sequelpro/sequelpro/issues/3705#issuecomment-653258075

Personally, I use Sequel Pro on a daily basis, and removal of support for it without at least providing Sequel Ace as an alternative is super frustrating for me as a user.

Thanks for reaching out about Local and Sequel Pro, and I’m sorry that this has interrupted your workflow!

I’ve moved this topic to the “Local Add-ons” category to help focus the conversation on possible ways that this functionality can be returned!

Removing Sequel pro is part of a larger effort of the Local team to streamline and simplify the third-party tooling that we encourage users to use. This allows us to deliver a leaner, more stable core Local experience that can be extended by developers through the use of Add-ons.

Sequel Pro is unique in that it was included a long time ago, before a Local add-on was even an option. As the latest stable version of Sequel Pro (v1.1.2) was released in April of 2016 and has become broken for many users, the Local team has had to field many support questions around users being confused about why Local encourages the use of broken software.

As you mention, the nightly build of Sequel Pro does work, and the maintainer of Sequel Pro has said that they are working on the project.

At the end of the day, if having a one-click connection to a Local site in Sequel Pro interests you, I encourage you to explore creating an add-on!

In particular, the TablePlus addon seems to function in a similar manner to what you are trying to do with Sequel Pro, so you might consider reviewing that add-on’s repo:

Hope that helps give some larger context into our decision to remove Sequel Pro from Local. If you have any questions, just let us know how we can help!

If Sequel Pro is not the needed future-proofed solution, it would be great to get the get

Alternative Woraround
Does anybody know a workaround or docs to connect a particular Local Database from Apps like Squel Pro/ Sequel Ace direct from the app direct.
So I could create for each of the local-db’s a connection-favorites. (not very user-friendly, but better than the cluttered interface and reduced options of Adminer)

As of right now, Sequel Ace can only connect to a MySQL database over TCP/IP (ie, a networking port) and not over a Unix socket.

Windows machines already connect to the DB over TCP/IP because they don’t have unix sockets, but if you want to change a site under MacOS to use TCP/IP, then you can follow the steps outlined in this FAQ:

Once the site has been updated, then you can connect to that database in whatever way your SQL client uses to connect over TCP/IP

Hey Ben,
Thank you for your help and the link. 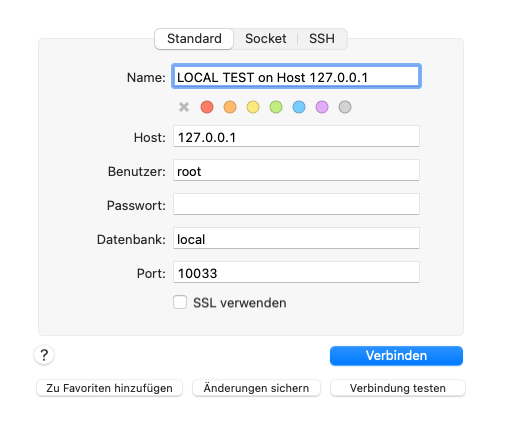 I actually don’t know if this should work with Sequel Pro.

You must use the Sequel Pro nightly.

Hey @anfragen,
Thanks for your hint.
Have downloaded Sequel Pro nightly. 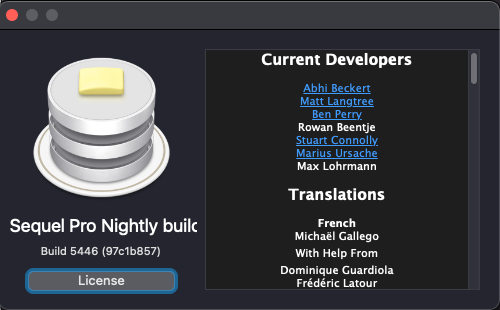 Unfortunately the Error is the same with the SP-Nightly-Built: reconnect with SiteShell. User was still created (error 1396) and the Port seams to be the same as last time 10033. 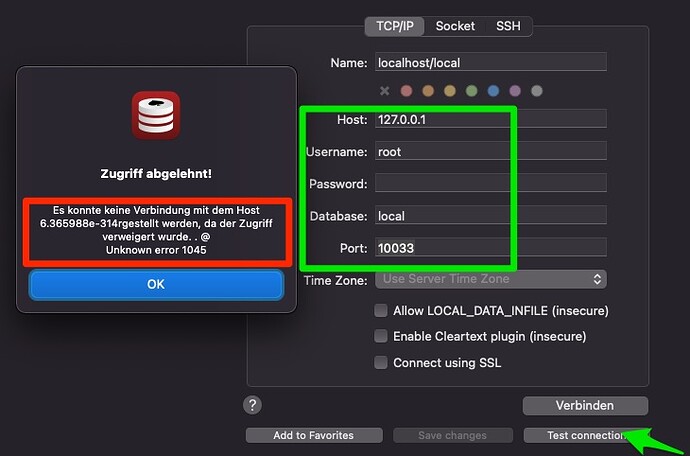 What could throw this error?

Maybe I missunderstood some basic stuff …

You must use the socket to connect, not the port.

The socket will be shown in the Local site’s database tab.

Hey @afragen, thanks for your hint with the socket again:

I used in all 3 Apps the connection with socket: Copy/Paste from Databse-Tab.

You must all ALL the data. You are missing the password and database name

Hey @afragen
You are great! (I not so much)
I have set the DB as local by the try&errors, also the three checkboxes.

Insanely with the modernest App «Sequel Ace» I got still an connection-error with the totally-same credentials like in SP and SP Nightly: Can’t connect to local MySQL server through socket ‘/pathTo/Library/Application Support/Local/run/1KLWSRWOR/mysql/mysqld.sock’

all works and I can use the well-rehearsed Workflow.

Thank you for your patient

Sequel Ace is sandboxed for the Mac App Store and using sockets hasn’t quite been figured out yet.

Tried to find a solution with the «not sandboxed» Sequel Ace from Homebrew. But this throws same error. Seams to be a combination with your mentioned «hasn’t quite figured out yet» and the AppStore sandboxing.

Honestly, I tried. I actually created an issue about the sandboxing socket issue a little over a year ago (https://github.com/Sequel-Ace/Sequel-Ace/issues/108). Unfortunately, it doesn’t look like there’s a good path forward at this point. @afragen, if you have any ideas, I’d be happy to look into it.

Actually Brandon I was simply thinking of bringing back support for Sequel Pro in this manner. The Sequel Pro nightly works fine with a socket.

Sequel Ace has instructions of how to use sockets with the sandboxed version (it requires specifying the socket location) e.g. in my.cnf:

So it would be great to know how to over-ride the {{socket}} config to allow everything else to work properly.

If I’m understanding correctly, then you likely just need to update the site’s conf/mysql/my.cnf.hbs file to that value, which looks like it’s the socket for Sequel Ace (?)

The main issue I’d forsee with that is that you’d need to re-initialize and install WordPress because that DB would likely be blank. It also doesn’t seem to portable, but I’d be curious to hear if that ends up working for you!

This topic was automatically closed 90 days after the last reply. New replies are no longer allowed.